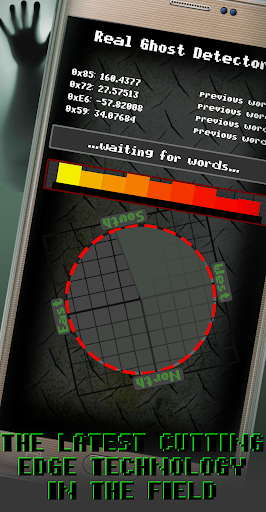 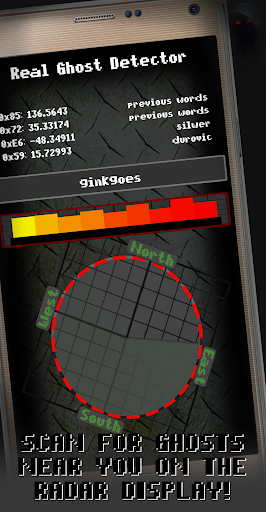 One of the worlds most downloaded ghost radar applications, Real Ghost Detector, is a free to use app that will be a critical part of your ghost toolkit!

Detection colors guide:
Each dot or blip on the radar is colored to represent the strength of a single observed entity and its readings, and if a detection goes outside of maximum radar range, then later that same detection returns within the observation range, the same color should be shown, or if it is a different, unique detection, and a unique color should appear although it is possible it will be close to the strength depending on what the sensors read. Each color is graded on the strength of the signal from any one radar blip across ROYGBIV color spectrum, and as dots enter and exit the sensor range their strength is graded based on the magnitude of the readings. The “weakest” types of detection to the “strongest” types of detection are arranged as follows:

This is an app developed through rigorous trial and error testing, to allow smartphones to detect the presence of ghosts, and many other supernatural beings in the area near the device. Effective range is limited to roughly 500 meters (~0.311 miles), and accuracy cannot be guaranteed because of variations in sensors from device to device.

Sometimes it helps to allow the app to run for a prolonged period of time for more accurate results. Of course this will allow more time for the radar to detect possible ghosts near the user. Effectiveness and range are slightly different among different devices, and running multiple instances nearby can cause interference and disturbances to the scanning process. Best used in low light, quiet areas, and often detects entities in areas you may have never suspected there to be any active apparitions. It’s recommended to repeat scanning and spot checking across several weeks of time for the most effective results as there are sometimes electronic and magnetic disturbances which will temporarily prevent accurate data being collected. To be a real pro one should collect notes as well alongside the app for referencing which times and specific locations where the sensors detect useful information.

It should be noted that visual detection cannot always be obtained for a variety of reasons, such as too much interference nearby, or that there simply are no entities to detect anywhere near you. Try again later, and at other locations!

NOTICE: For best results on the new version, it is recommended to turn on your LOCATION services, allowing the compass to detect true north geographically from your location. Otherwise it depends on magnetic north, which will be less accurate, and can easily be interfered with by electronics and magnetic objects! The app will not request permissions for location services, but the OS will provide true north if GPS is active.

Due to the supernatural nature of this app, and the fact that it cannot be scientifically proven, this app should be used for entertainment purposes only. Perhaps through experimentation, you may notice that unusual things happen while using this app, but often, this is just a figment of your imagination.