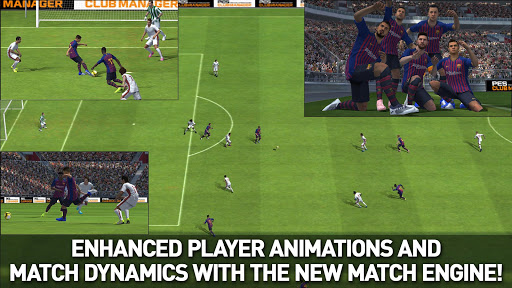 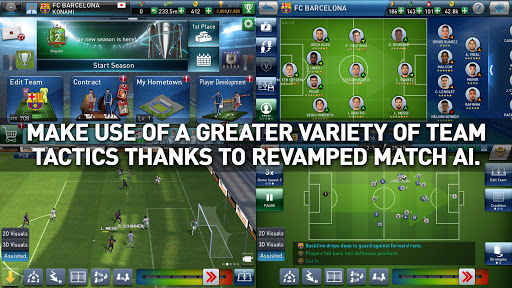 A major update including 2018-19 season player rosters and the improved match AI has been implemented!
PES CLUB MANAGER is a unique entry in the Pro Evolution Soccer series that will test your tactical awareness and managerial skill like no other soccer game available. Join over 30 million managers around the globe, and see if you’ve got what it takes to lead your club to glory.

NEW ENGINE BASED ON THE MOBILE VERSION OF “PRO EVOLUTION SOCCER 2018”
Experience matches from a 3D perspective, and enjoy enhanced graphics enabled by the new engine. Alternatively, switch to 2D to dissect each match event from a tactical standpoint.
The new engine also means that player animations and match dynamics are smoother than ever before! In addition, more variations of goal celebrations have been added to recreate all the drama and excitement of real-life soccer matches.

OFFICIAL LICENSES FROM ALL AROUND THE WORLD
Official team and league licenses from popular clubs in Europe and South America included.
Select from over 5000 licensed soccer players when creating your team.
Many legend players including BECKHAM, BATISTUTA, RONALDINHO, and ZICO are featured as well.

A SOCCER MANAGEMENT EXPERIENCE BUILT FROM THE GROUND UP FOR ENTHUSIASTS OF TACTICAL SPORTS GAMES (FREE-TO-PLAY)
Club Manager is a tactical soccer game that offers strategically-inclined soccer fans a comprehensive platform to effortlessly orchestrate each match. It’s easy to pick up and play, even for those who don’t have a lot of experience with typical action-focused soccer games. Unlike other games in the genre, Club Manager rewards your shrewdness as a manager as opposed to your reaction-time and ball control. Just like in the real world of soccer management, results depend on how well you’re able to predict the ebb and flow of each match to determine how each contest will unfold.

SHAPE YOUR TEAM TO SUIT YOUR STRATEGY
Contract skilled trainers and customize each player’s training regime according to your own personal preference.
You’ll also have access to new Player Skills such as “Heading”, “Heel Trick”, “Rabona”, “Low Lofted Passes”, “Malicia”, and “Acrobatic Clear”.
Each manager has their own philosophy when it comes to soccer, and Club Manager allows you complete freedom to shape your team in this image.
Compete with rival managers around the world with a team forged in the image of your favorite soccer strategy.

NEW MODE: “ALL-STAR SERIES”
Play matches with a team comprised of 18 players chosen from the multiple teams assigned for the mission.
All users select from the same player pool, ensuring there is little difference between each team’s base strength. As such, you’ll have to rely purely on your tactical prowess if you want to emerge victorious.
The more victories you achieve, the greater your reward will be, so make sure to try your hand at this exciting new contest.

ENJOY THE SEASON LEAGUE AT YOUR OWN PACE
The season league calendar revolves entirely around your schedule, which means progress only occurs when you have time to complete matches. Enjoy the season at your own pace without worrying about fixed dates or times!

A GLOBAL STANDARD FREE-TO-PLAY SOCCER GAME
For a true soccer-tactician, there is nothing sweeter than a victory won with limited team assets. The best tacticians won’t have to worry about limited assets for long, however, as winning league and cup titles earn you rewards that allow you to upgrade your team considerably.

This application is a Free-To-Play online game. Please make sure that the device is connected to the internet before you play.

Compatible OS: Android 4.2.0 or later
*The game performance is not insured to run in any devices that are not included in the list above.

Compatible Devices:
https://www.konami.com/wepes/mobile/pescm/ja/#compatibilty
*The game is not guaranteed to run on any devices that are not included in the list above.

License List URL
https://www.konami.com/wepes/mobile/pescm/en/#license
In June, PES CLUB MANAGER will be marking its 4th Anniversary since its initial release.
The game’s icon will also feature FC BARCELONA’s iconic top scorer, MESSI, who achieved this title 3 seasons in a row.