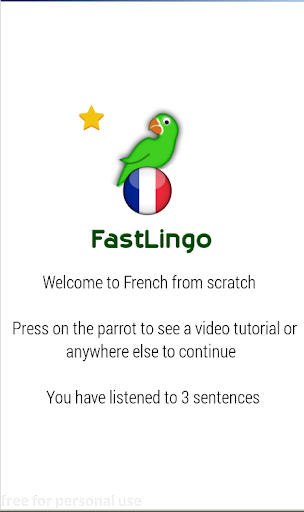 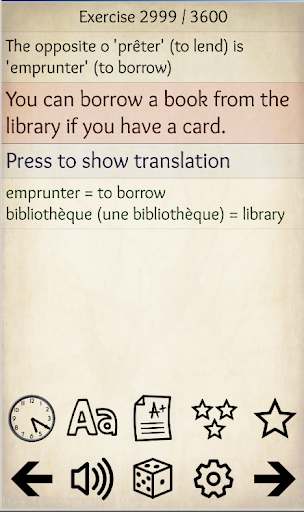 Description of Learn French from scratch

Learning languages is considered by many people a difficult process, and those who do it easily are considered ‘gifted’. While it is true that certain people are better at learning languages, it is not because they have a mysterious gift, but rather because they know what and when to learn. They can find the most efficient way to advance with the least effort. The problem with learning languages is not that there is not enough information but rather that there is too much of it. Unfortunately in most cases, in most manuals, this information is presented in a very unnatural way. Unnatural for the brain, which is not used to learning a language by looking at tables, but rather by repeating patterns, by speaking sentences. The ability is there, in any human, to learn a new language, but in most cases it is not used efficiently.
That is what this app tries to do. There will be no dry rules or table of conjugations. Rather every bit of grammar or vocabulary will be embedded in sentences, very simple sentences at first but then adding more and more complexity. The final aim of this application is to build enough structure (both grammar and essential vocabulary) that you can at some point continue this journey alone, adding knowledge to a very solid base.
To learn French you first need to understand that the complications lie mainly in how you write, not how you speak. For example, in the present tense, verbs have no endings pronounced for most of the persons, whereas in writing, each person has its distinct ending. Because of the recorded sentences you will be able to appreciate this difference and realize that it is easy to learn French if you don’t let yourself be intimidated by how complicated it appears in writing.
Lastly, I would appreciate feedback to my email, especially about bugs. I put a lot of effort in the language apps that I am developing, but it is a personal project so I don’t have the resources to test on all devices and configurations.
Now you can set a reminder that will call you back to the app when the app is minimized. You can find it in ‘Extras’.
Write me an email if you also want a reminder to pop up at a time that you choose every day.