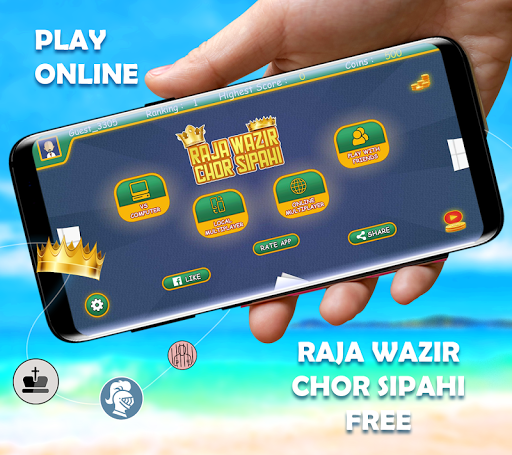 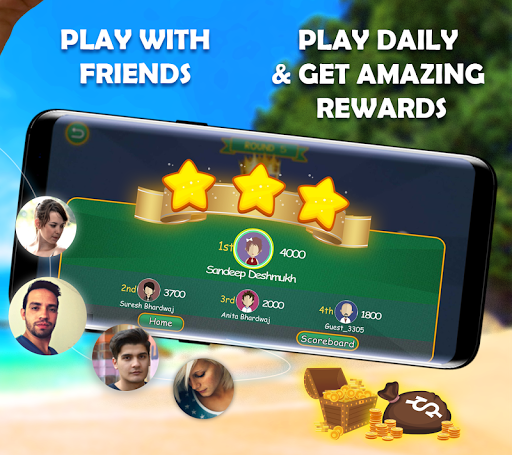 This is a famous childhood game played in India . Four players can play this game , 4 paper chits are made. Then one player shuffles the chits by clicking on Shuffle Button. Each Player will tap on one of the chits , see what he has got among Raja(King), Wazir(Minister), Chor(Thief), Sipahi(Police) , and close the chit again by clicking on it . Then all 4 players see the chit . Then Sipahi (Police) guesses who is the Chor (Theif). If His Guess is right , She/He will be given 500 points and if her guess is wrong she will get 0 points and her 500 points will e given to Chor(Theif). Raja(King) will be Given 1000 points and Sipahi(Police) will be given 500 points. You Can play as many Rounds As u can by Selecting number of rounds at the beginning of the game . At the end of the Each Round You Can see your score and at the end of game You can see who is winner. We also call this game as Raja Rani chor police or Chor Police Game.

Here Are Features Of Game Also Known As Raja Mantri Chor Police
Are you excited to try it out? Still wondering what makes this game the best version of the classic “RAJA WAZIR CHOR SIPAHI” game of our childhood? Here are features that make this game incredible –

• No internet connection required! Play against the computer.
• Multiple users can play on their own phones or all on the same phone.
• You can invite and play with School or College Friends.
• Private chat with your Facebook friends & Buddies.
• Emoji stickers can be used to tease other players during the game.
• Graphics with a classic look and the feel of a royal game.
• Classic Scoreboard to Display Scores of Each Round.
• Its Also Called As Raja Mantri Chor police in india.
• Its Also Called As Chor police game in india.

You Must Be Excited to try and play this luck-cum-guessing game? It is free to play. What are you waiting for? Download this amazing game “RAJA WAZIR CHOR SIPAHI” and experience the thrill of bluffing and guessing it right And Bringing the 90’s Memory Back.

Ready to Shuffle The Chits!